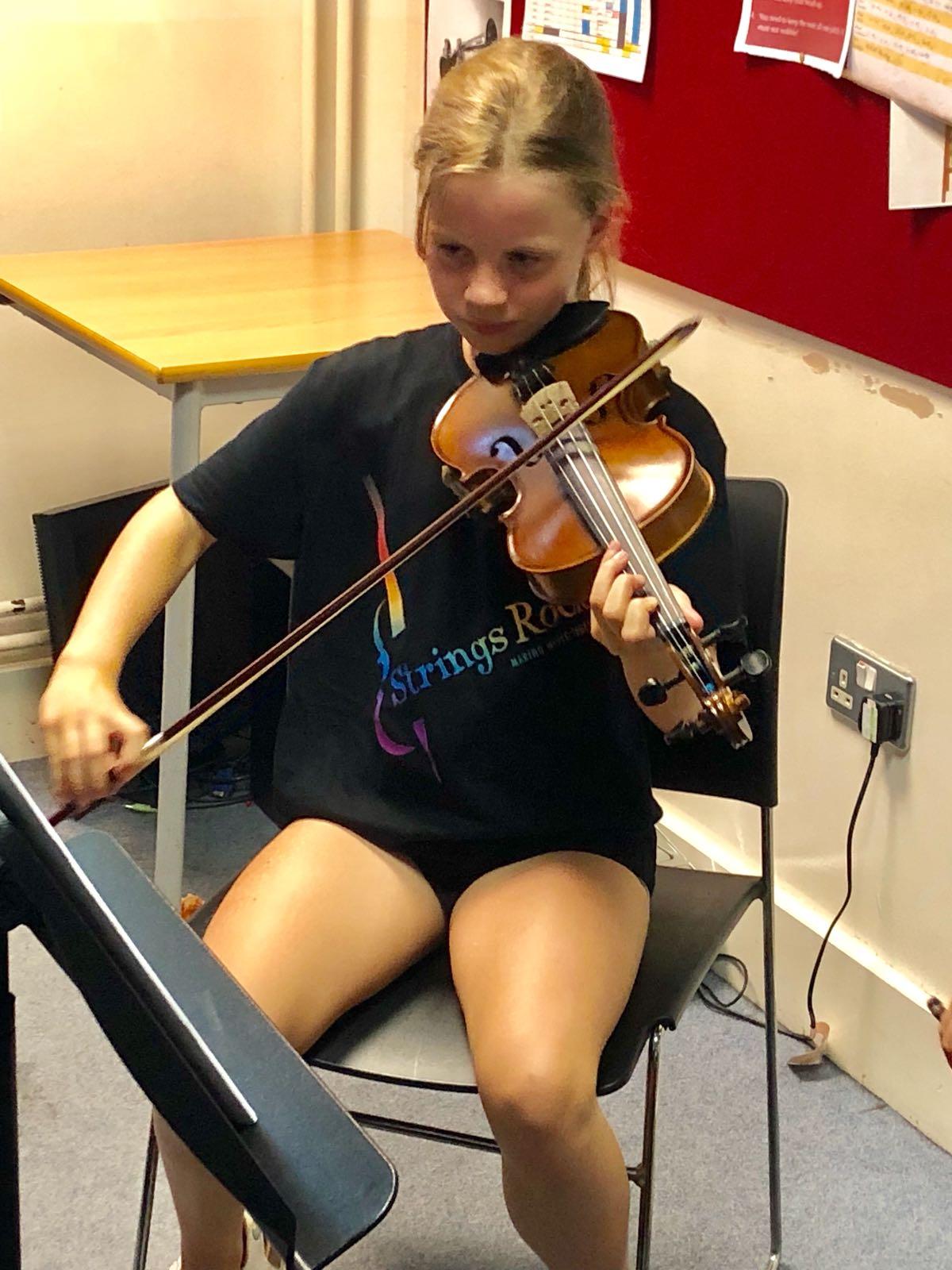 Sheida began learning the cello at the age of four and her teachers have included Joan Dickson, Florence Hooton, David Strange and Stefan Popov. She graduated with first-class honours from the Guildhall School of Music, then completed a year of study at the Hochschule für Musik in Cologne with Maria Kliegel and a Master of Music at the Eastman School of Music, USA (Steven Doane). As a chamber musician Sheida has performed abroad and in the BBC Martinu and Spitalfields Festivals in London. Recent performances include in the Purcell Room, St. John's Smith Square, St. James's Piccadilly, the National Portrait Gallery and on BBC Radio 3's "In Tune".

Alongside her performing career, Sheida taught at the City of London School for Girls and South Hampstead High School. She established cello ensembles in both schools, using her own arrangements of popular and classical music. She aims to encourage the development of group skills, which are essential elements of all string-players' futures. Paying special attention to listening and rhythm, these sessions compliment what has been learned in individual lessons and provide a fun context in which these skills can evolve.

Sheida previously taught at the Greycoat Hospital School and at specialist string schemes such as Stringwise, Musicale, the Royal Academy of Music Junior Department and the Alexander Music School in Spain. She is a member of the Incorporated Society of Musicians and the European String Teachers Association.

Inspired by her love of chamber music, the children she teaches and with the encouragement of her own teachers and fellow musicians, Sheida has been holding Cellos/Strings Rock! courses since 2008.

Born into a musical family, Guy Johnston joined his brothers in the Choir of King's College, Cambridge and went on to study cello with Steven Doane, David Waterman, Steven Isserlis, Ralph Kirshbaum, and Bernard Greenhouse. He achieved early recognition winning the BBC Young Musician of the Year award in 2000, appearing at the Opening Night of the BBC Proms in 2001, and being chosen Young British Classical Performer at the 2002 Classical Brit Awards. One of the leading cellists of his generation, he performs with major orchestras worldwide and is regularly broadcast on BBC radio 3. The Daily Telegraph praised him for his 'lustrous, sensitive artistry', and his Chandos recording of David Matthews's Concerto in Azzurro earned him a Gramophone Award nomination. He is a founder member of the Aronowitz Ensemble, appeared with Steven Isserlis at the 2010 Cheltenham Music Festival, and regularly attends the Open Chamber Music seminar in Prussia Cove and residences in Aldeburgh. A visiting professor at the Royal Academy of Music, Guy Johnston also gives classes at the Royal College of Music and Chetham's School of Music, and is currently working on educational projects with the Wigmore Hall. He is a patron of such charities as Future Talent, Harpenden Musicale, 'Cellos Rock!', and the Niemann-Pick Disease Group, and recently ran the London Marathon to help raise £20,000 for the Brain Injury Rehabilitation Trust.

Guy is keen to help and encourage young cellists by passing on his experiences and discoveries as a cellist and musician. He is particularly interested in reaching out to work with young cellists in the communities where he performs. In working and interacting with the younger members of his cello playing audience, Guy aims to dispel the image that live musical performance is inaccessible and elitist.

Tamara has taught clarinet and saxophone at the City of London School for Girls and St. Christopher's School for a number of years. She directs various ensembles in both schools, including the CLSG Jazz Ensemble, which she also founded. Tamara is a freelance musician and performs with various ensembles, bands and orchestras. She is also a DJ. In her spare time, she supports Arsenal football team, where she has a season ticket; she is a keen tennis fan and regularly watches Roger Federer at Wimbledon. She is also an avid reader, and is a big crime fiction fan.

Caryn studied at the Royal Academy of Music with Jean Harvey and Lydia Mordkovitch. Whilst there she formed the Regent quartet and won the Academy’s prize for best quartet, as well as the JC Wyse prize for violin performance. The Regent quartet has gone on to have a busy concert schedule, recently including performances at the Brighton Festival, Cambridge Corn Exchange Theatre and The National Portrait Gallery.

Caryn has performed Mendelssohn, Bruch and Bach concertos with the Cape Town Philharmonic Orchestra and last year appeared as a soloist with the London International Orchestra. She currently divides her time between freelance orchestral work, quartet engagements and teaching.

Caryn teaches violin and chamber music at South Hampstead High School and University College School. The chamber groups she coaches have gone on to win The National Schools Chamber Music Competition, Pro Corda Competition and Spring Grove Music competition many times, and in 2009 one of her quartets was awarded a Wigmore Hall performance.

Rachel's musical education started in the East Sussex Music Service. She continued as a scholar at the Royal Academy of Music at the Junior Department, during which time she won a government scholarship to study at the Purcell School of Music. She then went on to study with Derek Simpson through the Intermediate Department of the Royal Academy of Music before going on to gain her Bachelor’s degree and LRAM Teaching Diploma from the RAM.

Since then Rachel has enjoyed a varied career as a freelance cellist and teacher. She has worked with many orchestras, ballet companies and theatre productions in London and the UK. Her work has also taken her as far a field as Kuala Lumpur where she spent several months working with the Malaysian Philharmonic Orchestra. Rachel recently spent three years studying, working and teaching in New York, during which time she gained a Performance Certificate from the State University of New York studying with Julia Lichten.

Before to going to the States Rachel taught for nine years at St. Paul’s Girls School in Hammersmith and King’s College School in Wimbledon. She currently teaches privately and at Thomas’s School in Fulham. Upcoming concerts include a tour of China and events at the London 2012 Festival. The first few years of Alice’s life were spent in London before her family moved to Mid Wales. There she took up the cello after watching a demonstration of the instrument at school. Seeing that it was decidedly bigger than her sister’s violin, she knew in was the instrument for her! Alice’s joy for playing and teaching was inspired by her first teacher, Mira Henderson, who would regularly organise cello events for her students. These days, Alice’s students range in age from 5-70. She teaches at Nonsuch High School for Girls, Sydenham High School for Girls and on Junior Trinity’s String Time Programme. She also devises the Trinity Teenies music classes for 3-5 year olds and runs Boppin’ Bunnies classes for 0-4 year olds. Alice studied music at Dartington College of Arts, graduating with a first class honours degree in 2006. She went on to study with Joely Koos at Trinity Laban Conservatoire of Music and Dance on Pearson and TCM scholarships, graduating with a Masters in 2011. Over recent years Alice has played at Sadler’s Wells, Spitalfields Music Festival, on BBC Radio 3’s In Tune series, at the Royal Albert Hall and at The Sage, Gateshead where she performed Dvorak’s Cello Concerto. She has performed recital concerts with the Florestan Duo around the UK and abroad. In 2015, Alice recorded the music for the puppet show, Beegu and has performed in the Evelina De Lain Trio. In March she performed Max Bruch’s Kol Nidrei with the Cobweb Orchestra and a Concertino composed for her by John Hawkes with the Tyndale Symphony Orchestra.

James Greenfield MMus, BMus(Hons) studied cello at the Royal College of Music and Trinity College of Music. Since graduating he has led a successful and versatile career both with orchestras and chamber groups. Highlights include tours of Europe and China with his string quartet, several performances for radio, and television appearances including Dave Gorman’s Modern Life is Goodish. He is resident musician at Lauderdale House, Highgate where he organises regular concerts. He teaches at St. Paul's Junior School and Notting Hill Preparatory School and is the conductor for the Pro Corda Young String Experience.